Renewable portfolio standard (RPS) policies have long served as a key driver of state-level renewables markets. Lawrence Berkeley National Laboratory projected in 2013 that if full RPS policy compliance is achieved in all states with such policies on the books, 93,000 MW of new renewables will be added to the U.S. grid by 2035.

For several months in 2013, efforts to scrap or diminish RPS policies held the national spotlight, with numerous media forecasting a grim outlook for these policies. However, as of September 2013, only seven states had enacted legislation to amend their RPS policies. In this article, published in November 2013 by Solar Today, we profiled 11 RPS-related bills enacted by seven states and quantified the changes made, including the amount of additional new renewables required and the amount of existing resources newly qualified for the standard. These laws likely will eventually yield more than 1,000 MW of additional renewables, including more than 500 MW of additional solar.

The full article — available for free — may be downloaded using the form to the left. 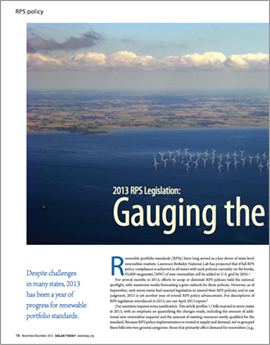