The Report of My Death Was an Exaggeration: Renewables Portfolio Standards Live On

In the 2013 legislative season, many states took a microscope to their renewable portfolio standard (RPS) policies, and media outlets sounded the alarm about the fall of this vital policy mechanism. In this report, we took inventory of RPS legislation considered by U.S. states in 2013. The report concluded that despite attacks on existing RPS policies around the country, states continued to advance their renewables pursuits.

As a broad, long-term policy mechanism, an RPS can serve as a general indicator of a state’s support for renewable energy development. Our research of RPS policies over the previous five years concluded that efforts to weaken or repeal state RPS policies aren’t new, that such efforts rarely succeeded, and that states continued to strengthen and expand their RPS policies. This analysis of 2013 legislation supports the narrative of continued RPS expansion.

The full report — available for free — may be downloaded using the form to the left. 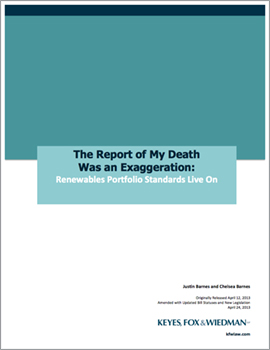